At last week’s Evolution and Medicine Symposium (link no longer available) at the Evolution 2011 meeting in Norman, Oklahoma, experts from around the country came together to discuss how evolutionary biology is influencing our understanding of human health and disease.

At the meeting, I talked about NIGMS’s commitment to funding research on the principles and dynamics of evolution and highlighted the importance of studying biological systems, such as infectious diseases and physiology, in their evolutionary context.

In preparing my remarks, I realized that the work of clinicians and evolutionary biologists could be highly synergistic. M.D.s know a great deal about individual variation and clinical presentation, while evolutionary biologists have a good grasp of variation at the population level. Both of these perspectives are very valuable to the field of personalized medicine, for example. The question now is: How do we create an opportunity for these two groups to work with each other?

The meeting featured many interesting talks, including:

This symposium came at the perfect time to describe two new NIGMS-related efforts. We previewed an NIH high school curriculum supplement on evolution and medicine that will be released this fall. Also, in conjunction with the National Science Foundation and the U.S. Department of Agriculture, we will be announcing later this summer a call for applications to study dynamic biological systems in their ecological and evolutionary contexts. I’ll share more details about these efforts in the near future. 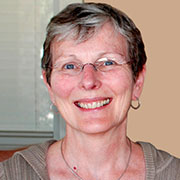 Before her retirement in December 2014, Irene was our expert on evolutionary biology and managed scientific programs to develop models of disease spread as well as models of scientific workforce dynamics.