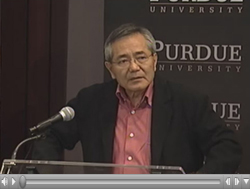 The Royal Swedish Academy of Sciences announced today that long-time NIGMS grantee Ei-ichi Negishi from Purdue University will share the Nobel Prize in chemistry with Richard Heck from the University of Delaware and Akiri Suzuki from Hokkaido University in Japan for “palladium-catalyzed cross couplings in organic synthesis.” All of us at NIGMS congratulate them on this outstanding recognition of their accomplishments.

Carbon-carbon bond-forming reactions are the cornerstone of organic synthesis, and the reactions developed by these Nobelists are widely used to produce a range of substances, from medicines and other biologically active compounds to plastics and electronic components. NIGMS supports a substantial portfolio of grants directed toward the development of new synthetic methods precisely because of the large impact these methods can have.

I have personal experience with similar methods. I am a synthetic inorganic chemist by training, and a key step during my Ph.D. training was getting a carbon-carbon bond-forming reaction to work (using a reaction not directly related to today’s Nobel Prize announcement). I spent many months trying various reaction schemes, and my eventual success was really the “transition state” for my Ph.D. thesis: Within a month of getting this reaction to work, it was clear that I would be Dr. Berg sooner rather than later!

I’d also like to note that this year’s Nobel Prize in physiology or medicine to Robert Edwards “for the development of in vitro fertilization” also appears to have an NIGMS connection. Roger Donahue sent me a paper he coauthored with Edwards, Theodore Baramki and Howard Jones titled “Preliminary attempts to fertilize human oocytes matured in vitro.” This paper stemmed from a short fellowship that Edwards did at Johns Hopkins in 1964. Referencing the paper in an account of the development of IVF, Jones notes that, “No fertilization was claimed but, in retrospect looking at some of the photographs published in that journal (referring to the paper above), it is indeed likely that human fertilization was achieved at Johns Hopkins Hospital in the summer of 1964.” The paper cites NIGMS support for this work through grants to Victor McKusick.

In all, NIGMS has supported the prizewinning work of 74 grantees, 36 of whom are Nobel laureates in chemistry.