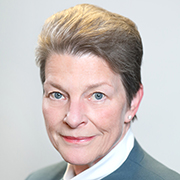 Until her retirement in early 2019, Ann was director of extramural activities. In this position, she set and coordinated grant funding policies and procedures, and advised staff on the best grants management practices.

The open session of the next meeting of the National Advisory General Medical Sciences Council will be on Friday, January 23. It will begin at 8:30 a.m. with remarks by NIGMS Director Jon Lorsch and continue with reports on a variety of Institute activities and, as usual, a period for public comments.

You can attend the meeting in person or watch it remotely live or later via NIH Videocast.

Our next National Advisory General Medical Sciences Council meeting is September 18-19, 2014. Although the first day is a closed session, Friday’s portion of the meeting is open to the public. You can watch the open session online.

Friday’s presentations begin at 8:30 a.m. with opening remarks by NIGMS Director Jon Lorsch. In addition, the agenda includes presentations by staff on a variety of Institute activities as well as a concept clearance for the pilot to support NIGMS investigators’ overall research programs.

You’re also welcome to attend the meeting in person and make comments during the public comment period.

If you can’t view the meeting live, you can watch it later in the videocast archive.

Once again, we’re videocasting the open session of the National Advisory General Medical Sciences Council meeting. The half-day session begins at 8:30 a.m. on Friday, May 23, with opening remarks by NIGMS Director Jon Lorsch.

Other items on the agenda include presentations on our cell repository and our postdoctoral research associate program as well as a concept clearance for data reproducibility training modules.

If you can’t view the meeting live, you can watch it later in the videocast archive.

You’re also welcome to attend the meeting in person and make comments during the public comment period.

NIH has just announced a significant change in its policy for resubmission applications.

Background and details on the new resubmission policy are in NIH Guide NOT-OD-14-074 and a blog post by NIH’s Sally Rockey.

The National Advisory General Medical Sciences Council will have its winter meeting on January 23-24, 2014. Although the first day is a closed session for the review and discussion of grant applications, Friday’s portion of the meeting is open to the public. The agenda includes presentations on NIGMS programs and policy changes as well as a public comment period.

You may attend the open session in person or watch the presentations and discussions live or later.

To ensure that we are using our resources in the most effective and efficient way possible, we are examining all of our funding mechanisms. One area that we have recently focused on, in part due to the current fiscal situation, is our support for scientific meetings, conferences and workshops. We understand the importance of these meetings, but we receive a large number of requests to support them and have concluded that it is not cost-effective to consider most of these requests. The numerous applications for small conference grants are costly to process and review, and the funds used for them compete directly with research project grants, including R01s. Our priority is to use our resources in the ways that most directly promote research and training, which already include mechanisms to allow students and fellows to attend scientific meetings.

In general, we will only support meetings that:

Simply because a meeting falls within the general areas of science we support does not mean that we will consider it for funding.

We therefore anticipate that we will accept very few R13 or U13 applications in the future. We strongly encourage potential applicants to contact us before requesting approval to submit an application. For a list of contact people and more information on the application process, see http://www.nigms.nih.gov/Research/Mechanisms/Pages/
SupportScientificMeetings.aspx

The Center for Scientific Review (CSR) has recently adjusted the base that a number of permanent study sections and special emphasis panels (SEPs) use to calculate percentiles for certain application types. Applications that were reviewed in a SEP meeting for the May 2013 Council round will be assigned a percentile ranking calculated from the new base. In some cases, revised summary statements will be issued for those applications missing percentile scores or with an incorrect percentile. The percentile ranking will also appear in the eRA Commons account of the principal investigator(s).

We here at NIGMS are often asked to explain how percentile rankings factor into determining which awards to make. We do not rely solely on a percentile cutoff; we consider a number of additional factors, including an investigator’s career stage, a laboratory’s other research funding, NIGMS research portfolio balance, and other programmatic priorities. For more information, see http://www.nigms.nih.gov/Research/Application/Pages/SuccessRateFAQs.aspx.

Each year, NIH institutes and centers nominate outstanding young scientists for the Presidential Early Career Award for Scientists and Engineers (PECASE), which is the highest honor bestowed by the U.S. government to individuals beginning their independent research careers. The grantees, who must be new investigators in the first year of an R01 or DP2 award, are selected for their innovative research record, potential to continue on this productive route, and community service activities. In recent years, NIH has annually nominated 20 individuals, with approximately 1 or 2 of them being NIGMS grantees.

Among this year’s PECASE recipients are two NIGMS grantees, Niels Ringstad of the Skirball Institute of Biomolecular Medicine at New York University School of Medicine and Erica N. Larschan of Brown University. We identified them because of their cutting-edge neuroscience and developmental genetics research, respectively, and their outstanding commitment to education, mentoring and increasing the diversity of the scientific workforce.

Below, they answer questions about their research and PECASE experience and offer advice to other early career scientists.

What does your research focus on?

Neils Ringstad: Our lab studies the simple behaviors of a small roundworm to identify genes that function in chemical signaling in the nervous system. Even though the organism we study, Caenorabditis elegans, has a tiny nervous system with only 302 neurons, these neurons are very similar to the neurons in our brains and use many of the same neurotransmitters to transmit and process information. We’re particularly interested in serotonin signaling pathways, which are important therapeutic targets in psychiatry.

Erica Larschan: We study how genes are precisely targeted for regulation within the highly compact eukaryotic genome. Gene regulation is a fundamental process that is misregulated in many diseases including cancers. We are interested in identifying new proteins that could serve as targets for anti-cancer therapies.

What was it like to come to Washington, D.C., to meet NIH staff, the President and other PECASE recipients?

Ringstad: It was a tremendous honor to be an awardee. We heard a resounding endorsement of basic science and a clear statement of its value to the American people from both the White House and the NIH. That gave me and my group a boost that will last for years.

Larschan: My PECASE visit was one of the most exciting moments of my scientific career. It was a great opportunity to present brand new data from our lab to a broader audience and interact with the other PECASE winners.

What advice would you give to young investigators?

Ringstad: We pick problems to tackle because we see some good in solving them, and we pick them before we know how tough they are to solve. Don’t lose sight of the hopes and expectations that you had for your project before you did your first experiment.

Larschan: The most important piece of advice is to focus on the most exciting and central questions that you can address with your research. It is essential to use many different approaches to rigorously answer the most difficult questions.

NIH has announced a new policy whereby applications from investigators who receive more than $1 million in direct research support from active NIH grants will receive additional scrutiny by NIH institute and center (IC) advisory councils. This is a threshold, not a cap: Investigators may still receive additional grant awards if the ICs determine such awards will further their missions.

A few notes: The policy replaces a piloted one that set the threshold at $1.5 million total costs. NIGMS will continue its current practice that sets the threshold for special scrutiny of well-funded investigators at $750,000 or more in direct costs for all research support, regardless of the source.

Below is a chart that outlines some of the differences between the NIH and NIGMS policies. For more discussion on this topic, see comments to my earlier post.

NIH recently modified the funding acknowledgement language in the notice of award to read:

Each publication, press release, or other document about research supported by an NIH award must include an acknowledgment of NIH award support and a disclaimer such as “Research reported in this publication was supported by the National Institute of General Medical Sciences of the National Institutes of Health under award number R01GM085232. The content is solely the responsibility of the authors and does not necessarily represent the official views of the National Institutes of Health.” Prior to issuing a press release concerning the outcome of this research, please notify the NIH awarding IC in advance to allow for coordination.

A key difference in the new version is the reference to “of the National Institutes of Health” after the name of the funding component. The goal is to make it clear that the funding component is part of NIH and, more broadly, to convey the role and value of NIH support. As always, we recommend that if you have more than one grant, you only cite the one(s) that supported the research described in the document.

For some time now, notices of award have also mentioned the NIH public access policy, which requires you to submit papers accepted for publication to NIH PubMed Central.

For more on communicating about your research, see an April 2012 Rock Talk blog post by NIH’s Sally Rockey and our Attribution of NIH/NIGMS Support page.

Until her retirement in early 2019, Ann was director of extramural activities. In this position, she set and coordinated grant funding policies and procedures, and advised staff on the best grants management practices.