Before his retirement in May 2012, Jim had a long-standing interest in systems biology, promoting its approaches to study cell and molecular biology. He also fostered the development of bacterial informatics, including the establishment of an online genomic resource for the E. coli K12 bacterium. 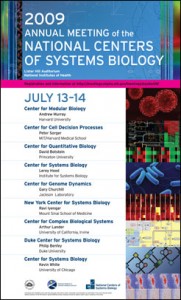 Earlier this week, I attended the annual meeting of our National Centers for Systems Biology, which was held at NIH. This was the 5th meeting since the program started in 2002, and one of its goals was to introduce NIH research staff and administrators to the exciting developments and applications of systems biology as well as the activities of the nine current centers.

Every year, I am more and more impressed with how systems biology has blossomed. This year, I was particularly pleased to see the sophistication and enthusiasm of the students and postdocs being trained at these centers. The junior scientists made a lot of new contacts over coffee and during the poster sessions, and the investigators benefitted greatly from interacting with each other, especially talking about how they handle the other goals of the centers program, such as outreach and training. A number of new collaborations were hatched.

The science presented by each center was very thought-provoking, especially the “lightning talks” delivered primarily by student presenters who had to get across the aim and conclusions of their research in just one or two minutes and using only one slide!

Outside the formal meeting, the investigators talked about the future of careers in systems biology and the professional paths of some of the students who have completed their training. It appears that the students aren’t having difficulty finding positions! There were some concerns that the intrinsically interdisciplinary nature of systems biology might pose some challenges as new hires seek to replicate the intellectual atmosphere, facilities and instrumentation that they became used to having. And, there was the question of how tenure would be handled in traditional departments with established boundaries. Most of the investigators thought that systems biology, like “molecular biology” before it, should be viewed as an approach, not a defined discipline, and that systems thinking would likely permeate the establishment as it matures.

I suspect that this year’s participants, like myself, experienced a strong sense of being part of a rapidly developing new wave of science. My overall impression is that the future of systems biology appears to be in good hands—an outcome we hoped for when the centers program was designed.

If you’re interested in systems biology and the abstracts of the science presented, you might check out our new portal for the centers, which made its debut at the meeting. It’ll be the clearinghouse for center activities and resources. It will also have a lot of information on available courses, lectures, research/job opportunities, funding announcements, available data and software.

Before his retirement in May 2012, Jim had a long-standing interest in systems biology, promoting its approaches to study cell and molecular biology. He also fostered the development of bacterial informatics, including the establishment of an online genomic resource for the E. coli K12 bacterium.