Natural products have been a prolific source of therapeutic drugs because they have been selected through evolution to be biologically active.  New opportunities for natural products development are being made by genomic discoveries and are poised to reinvigorate this critically important area.

At its September meeting, the NIGMS Advisory Council approved a new initiative that will use the cooperative agreement (U01) mechanism to support collaborative and multidisciplinary research aimed at developing high-throughput, broadly applicable approaches for natural products discovery that integrate genomics, synthetic biology and bioinformatics. Research under this initiative will provide the scientific community with tools and knowledge for inferring the basic structure of natural products and for producing natural products, regardless of whether the source is cultivable or the biosynthetic operon is expressed in cultures.

We expect the funding opportunity announcement to be published in the NIH Guide early in 2013. In the meantime, I encourage you to start talking with potential collaborators and thinking about applying.

For more on the current challenges of natural products discovery, read a Nature Chemistry article 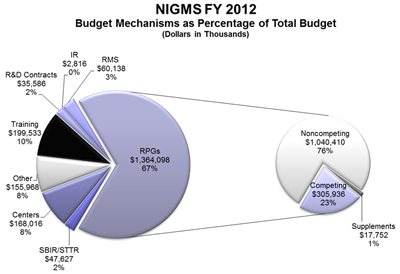 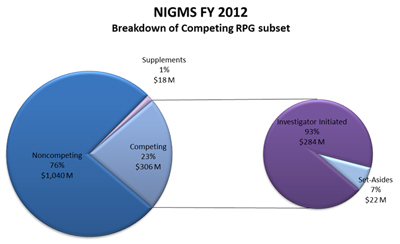 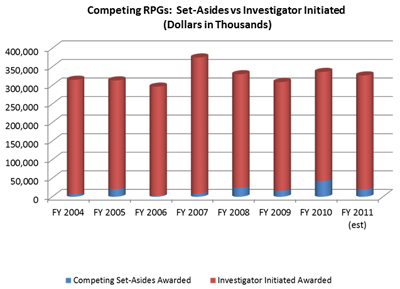 Our research programs often produce valuable scientific resources. But if one of these initiatives ends, then what becomes of the resource it generated?

To address this issue, we formed a committee of NIGMS staff to explore options for maintaining scientific resources resulting from NIGMS-supported research. We defined a resource as a non-hypothesis-driven activity to provide data, materials, tools or services that are essential to making the most timely, high-quality and cost-efficient progress in a field. We proposed principles for continuing support of “legacy” resources that are of great benefit to researchers working within the Institute’s mission areas.

Based on our discussions, we recommended that NIGMS pilot a limited program to fund the maintenance of existing, high-value resources. The NIGMS Council approved the concept in May, and the funding opportunity announcement just appeared in the NIH Guide. Applications are due once per year in October.

If you are interested in applying, read the announcement for details, including the special eligibility requirements. And before you apply, be sure to contact the appropriate NIGMS division director to discuss your ideas.

We hope that the results of this limited pilot program will help guide future decisions about maintaining important research-generated resources.

It’s safe to say that the discovery that human non-embryonic cells can be reprogrammed to an embryonic stem cell-like state has created a lot of excitement in the scientific community. These cells provide a wonderful opportunity to investigate the fundamental molecular and genetic properties of pluripotent cells.

Last month, the NIGMS Council approved a new grant program that will focus on studying the basic biology of pluripotency and reprogramming, with an emphasis on human induced pluripotent stem (iPS) cells. This initiative will use the program project (P01) mechanism to support collaborative research that advances a comprehensive understanding of the basic biology of pluripotency, the molecular events and mechanisms of reprogramming, and the epigenetics and epigenomics of the pluripotent and reprogrammed states.

Once the funding opportunity announcement has been published in the NIH Guide later this summer, we will post it on the Feedback Loop site. In the meantime, I encourage you to start talking with potential collaborators and thinking about applying.

Back in May, I described a concept clearance for a new grant program focused on microbe-host interactions. A number of readers commented on the post, and I was delighted to see the early interest in this new program, as well as other related programs at NIH.

The RFA has now been published in the NIH Guide.

We’re soliciting applications for projects that will reveal the basic principles and mechanisms that govern host-associated microbial community structure and function through studies in the following areas: model systems, community physiology, community genetic interactions, community dynamics, and technology development. Please note that research projects designed solely to carry out metagenomic sequencing or surveys of microbial diversity are outside the scope of this program.

Microorganisms are everywhere–in and on our body, and in our environment. We know that these microbial communities affect our health and the health of plants and animals that we depend on. Yet, we know very little about the physiology and ecology of these communities and their interactions with their hosts.

Today, the NIGMS Council approved a new grant program that will focus on studying the basic principles that govern microbial community structure and function within a host. Research under this program will advance our understanding of the basic biology of microbial communities. It also has the potential to provide clues for developing new strategies to promote human health and treat or prevent diseases.

Once the funding opportunity has been published in the NIH Guide in early August, we will post it on the Feedback Loop site. In the meantime, I encourage you to send me comments and start thinking about applying.