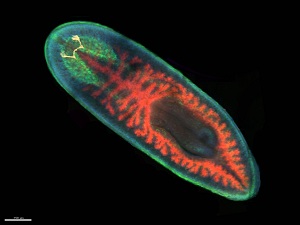 A recent article in NIH’s Peer Review Notes illustrated how Alejandro Sánchez Alvarado developed the planarian as a model organism for studying regeneration.

When he applied for his first NIH grant in 1997, Sánchez Alvarado was a new investigator at the Carnegie Institution of Washington who had little preliminary data supporting his proposal. The peer reviewers astutely recognized the promise of his grant application, and they scored it favorably.

NIGMS funded the grant and continues to support Sánchez Alvarado’s studies, now at the Stowers Institute for Medical Research. Since receiving that first grant, Sánchez Alvarado has helped turn planaria into tiny workhorses that have opened new avenues for understanding tissue regeneration and other developmental processes. He has also trained and mentored graduate students and postdocs and served the scientific community as a study section and NIGMS advisory council member.

Sánchez Alvarado’s work is just one example of how NIGMS-funded research on model organisms, including those that are currently considered unconventional, has significantly advanced scientific progress. Think of the protozoan Tetrahymena thermophila and the discovery of telomeres, or the nematode Caenorhabditis elegans and the discovery of RNA interference. The fungus Neurospora crassa has been an important player in understanding the genetics of circadian rhythms, and the bacterium Caulobacter crescentus has led to important insights on the regulation of cell division.

We have long supported research using these and many more model organisms, including mammalian species and other vertebrates, invertebrates, plants, yeast, and additional bacteria. We know that findings made in such systems can translate rapidly—and often unexpectedly—into leaps in conceptual understanding of fundamental life processes, the development of better research tools and approaches, and new strategies for diagnosing and treating diseases. We also know that we can never predict where the next breakthrough will come from—or in which organism. So we continue to encourage applications for projects that use model organisms, including uncommon ones, when these systems offer distinct scientific advantages.