As part of our program assessment process, we have analyzed NIGMS program project (P01) grants to improve our understanding of how their outcomes compare with those of other mechanisms.

The most recent NIGMS funding opportunity announcement for P01s states that individual projects “must be clearly interrelated and synergistic so that the research ideas, efforts, and outcomes of the program as a whole will offer a distinct advantage over pursuing the individual projects separately.” From this perspective, we sought to address three major questions:

To address these questions, we analyzed the outcomes of P01 grants using several different metrics and compared these outcomes to those of two comparator groups: single-principal investigator (PI) R01s and multiple-PI R01s. Since P01s could be considered as a collection of single-PI R01s and one or more cores, we chose single-PI R01s as a comparator group. Because a major facet of P01s is their focus on using collaborative approaches to science, we also wanted to compare their outcomes to another collaboration-focused research grant: multiple-PI R01s. While structurally different from P01s, multiple-PI R01s allow for a comparison between two competing models of funding team science within the NIGMS portfolio.

Figure 1 charts both P01s and multiple-PI R01s as a percentage of funds for awarded NIGMS research project grant (RPG). While the proportion of awarded RPG1 funds going to P01s has remained relatively flat since 2007, the share going to multiple-PI R01s has increased dramatically since their introduction, indicating strong demand for this type of mechanism within the community. To test for any field-specific biases, we also utilized text analysis to assess grant abstracts and specific aims from funded grants in these two groups and found that the mechanisms support similar research areas within the NIGMS portfolio (data not shown). 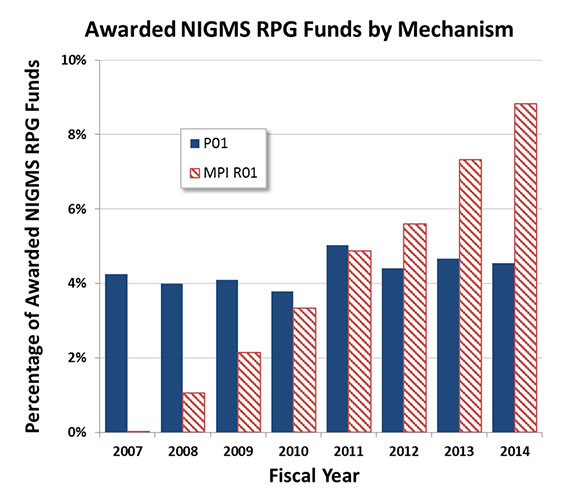 To determine whether P01s achieve synergies beyond those of R01s, we looked for differences in both productivity, as measured by publications, and impact, as measured by two different citation metrics. For publications, because P01s generally have much larger budgets than do R01s and multiple-PI R01s, comparing total publication counts would be misleading. Therefore, we assessed the cost-effectiveness of publications for each of the three grant mechanisms normalized by years and award size. The results, shown in Figure 2, suggest that multiple-PI R01s outperformed both P01s and single-PI R01s in terms of cost-effectiveness of publications. The same holds true when publications are weighted by the number of grants they cite (data not shown) to control for funds contributed to a project from additional sources.

Figure 3. Percentage of Publications per Citation Percentile Rank by Mechanism. The dark to light bands from left to right represent the percentage of publications in the top 1%, 10%, 20% and 50%, as well as the bottom 50%, of publications by citation count (normalized for field and year). While both P01s and R01s produce a higher proportion of articles in the top 1%, 10%, 20% and 50% than the average distribution, multiple-PI R01s produce even more highly cited papers.

Although the citation percentile rank is normalized for field and year, there may still be concerns with comparing citations across different fields due to differing citation patterns, field sizes and other parameters. To address this potential issue, we applied another metric of impact known as the relative citation ratio (RCR)

To address the question of whether certain research areas require a P01, we examined the top fields in which papers arising from P01s and multiple-PI R01s were published (Figure 5). The results suggest that there is a great deal of overlap, at least in terms of these broad categories.

Figure 5. Top Science Field Categories for Publishing by Funding Mechanism. The dark to light bands from left to right represent the distribution of publications by subject category and by funding mechanisms.

Although these analyses certainly do not answer every important question about the optimal ways to fund collaboration and team science, they provide data that will inform the Institute’s efforts to develop the most efficient and effective mechanisms and policies to support a broad, diverse and vibrant portfolio of fundamental biomedical research.

Travis, an economist by training, was a program analyst in the NIGMS Division of Data Integration, Modeling, and Analytics before leaving for the Small Business Administration in July 2022.