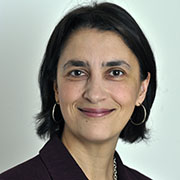 A developmental and reproductive biologist, Tanya manages developmental genetics research grants. She is a member of the Sex Differences Trans-NIH Working Group.

If you use genetically modified mice or work on a gene in another model organism for which a homolog exists in mice, the Knockout Mouse Phenotyping Program (KOMP2) may benefit your research. It’s a resource that generates mice carrying specific genetic mutations and systematically phenotypes them according to uniform, high quality-control standards.

KOMP2 targets a range of phenotypes in order to improve the chances of gaining preliminary insights into the function(s) of genes that influence multiple traits, including targeting genes for which no information is currently available. The resource also captures negative results and disseminates them broadly. It examines male and female mice and provides data down to the individual mouse level.

END_OF_DOCUMENT_TOKEN_TO_BE_REPLACED

Although researchers have made major progress in achieving a balance between male and female subjects in human studies—women now account for roughly half of the participants in NIH-funded clinical trials—a similar pattern has not been seen in pre-clinical research involving animals and cells. To inform the development of policies that address this issue, NIH has issued a request for information (RFI) on the consideration of sex as a biological variable in biomedical research.

As NIH Deputy Director for Extramural Research Sally Rockey wrote in a recent blog post announcing the RFI, “Sex is a critical variable when trying to understand the biological and behavioral systems that fundamentally shape human health.” Appropriate representation of animals and cells is also relevant to NIGMS and NIH efforts to enhance scientific rigor and data reproducibility in research.

And in her own blog post about the RFI, NIH Associate Director for Research on Women’s Health Janine Clayton said that while many scientists have already expressed support for the policy change, she has also heard from many sources that it needs “to be carefully implemented, as a true benefit to science—and not become a trivial, bureaucratic box to check.” She noted that comments in response to the RFI will guide NIH in creating “meaningful change in a deliberate and thoughtful way.”

Since NIGMS supports a significant amount of basic biomedical science that utilizes animal models and cells, we encourage our grantees to submit their input on this topic by the October 13 deadline.

UPDATE: The deadline for submitting input has been extended to October 24.

A developmental and reproductive biologist, Tanya manages developmental genetics research grants. She is a member of the Sex Differences Trans-NIH Working Group.