A story titled “America’s Brain Drain” that aired this past weekend on the CBS Sunday Morning show featured an interview with long-time NIGMS grantee Frank Bayliss of San Francisco State University (SFSU). It described how he is trying to nurture smart American students who are interested in pursuing science careers, in part through programs funded by the NIGMS Division of Minority Opportunity in Research (MORE). In recognition of his contributions in this arena, Frank received the Presidential Award for Excellence in Science, Mathematics and Engineering Mentoring in 2009.

The segment also featured a MORE-supported student, Damon Robles, who participated in our Bridges to the Baccalaureate program at the City College of San Francisco. He later transferred to SFSU, where he became a Minority Access to Research Careers undergraduate student. Now, he is in a Ph.D. program in physical chemistry at the University of California, Davis.

Our MORE programs represent some of the ways we seek to foster a diverse scientific workforce and prepare students for careers in science-related fields. If you’re interested in finding out how you can support a MORE student in your lab for a summer or longer, contact me at singhs@nigms.nih.gov or 301-594-3900. 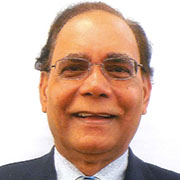 Before leaving NIGMS in January of 2022, Shiva, a microbiologist with extensive experience in scientific administration, managed predoctoral T32 training programs, predoctoral F30 and F31 fellowships, as well as a broad array of other undergraduate and graduate student training and development programs.