in Philadelphia. The day-long event highlighted the fundamental role of chemistry in biomedical science and demonstrated that NIGMS is a major supporter of the field.

Titled “50 Years of NIGMS-Supported Chemistry Enabling Biomedical Research,” the symposium featured distinguished speakers who collectively represent the broad range of medically important chemistry we support. Abstracts of their talks are available online. The speakers were:

Tom Wandless of Stanford University and JoAnne Stubbe of MIT moderated the symposium.

The theme of the entire ACS meeting, “Materials for Health and Medicine,” reinforced the importance of chemistry to many types of biomedical research, including the structural and functional characterization and manipulation of biological molecules; the characterization of metabolic pathways; the discovery, development and manufacture of therapeutics and diagnostics; and the design and construction of biocompatible materials and nanoscale devices.

It would be an understatement to say that there was a high degree of interest at the meeting in these aspects of chemistry research. Among the evidence is the enthusiastic participation in the symposium by so many leading scientists, co-sponsorship by five ACS divisions (biological, organic, inorganic, carbohydrate and medicinal chemistry), designation as an ACS Presidential event

For more on our support of chemistry research, see the Feedback Loop post by Mike Rogers, the recent Chemical & Engineering News feature article, and the video of a press conference with chemical scientists whose careers were aided by our support.

So far, NIGMS has funded the work of 36 chemistry Nobel laureates. We’ll find out on October 10 if that number increases this year. 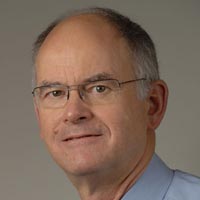 Before his retirement in December 2019, Bob, who is trained in synthetic and bioorganic chemistry, managed research grants in organic chemistry. Prior to joining the Institute, he served as a scientific review officer in the NIH Center for Scientific Review and as a program director at the National Cancer Institute.