Continuing our regular posts detailing funding trends for NIGMS programs, here we provide a closer look at the NIGMS Academic Research Enhancement Awards (AREA) R15 program. AREA grants support small-scale research projects involving primarily undergraduate students at institutions that received no more than $6 million in funding from NIH in 4 of the past 7 years. Awards can be up to $300,000 in direct costs for the entire project period of up to 3 years. Unlike most of our other Research Project Grant (RPG) awards, which have noncompeting renewals on an annual basis, R15 funds are obligated in the first year and last the duration of the project period. Grantees can renew these awards in a competitive proposal process.

NIH offers two different R15 awards: AREA and the Research Enhancement Award Program (REAP). The key distinction between them is that AREA grants are available to undergraduate-focused institutions, while REAP grants are available to health professional and graduate schools. See the FAQs about the programs for a list of common questions. NIGMS participates in only the AREA program.

Figure 1 shows a history of R15 award investments from NIGMS and the rest of NIH on an annual basis from Fiscal Year (FY) 2012 to FY 2021. Because funds for R15s are obligated in the first year, all R15 funding data reflect competing award obligations.

Figure 1. NIGMS and NIH Funding of R15 Awards, FY 2012-2021. Illustrated is the total funding for R15 awards by NIGMS (solid purple bars; left axis), NIH as a whole (green-striped bars; left axis), and the fraction of NIH R15 funding provided by NIGMS (black dashed line with circles; right axis). NIGMS has provided 30% to 40% of all funds awarded to R15 grants over the past 7 years.

Although NIGMS participates in only the AREA program, the Institute currently supports over one third of all R15 awards at NIH. As shown, the level of funds awarded to R15 grants has decreased by nearly $30 million over the course of the last 2 years at NIH, and NIGMS has seen a decrease in approximately $10 million in funds in the past year. To better understand what might be driving this observation, we report on trends in applications and awards to the AREA program at NIGMS.

As shown above, the number of applications to the NIGMS AREA program declined by over 40% in the past 4 years, suggesting that the decrease in NIGMS funding for the program has been primarily due to a decrease in incoming applications. It’s likely that the high funding rates for NIGMS AREA applications between FY 2015 and FY 2018 led in part to the decrease in applications because funded AREA investigators can only have one active grant at a time. Thus, as more principal investigators receive funding, applications would be expected to decline. NIGMS remains committed to the AREA program and encourages investigators at eligible institutions with NIGMS mission-relevant research projects to apply. Although the number of awards slightly decreased from FY 2020 to FY 2021, the success rate of AREA R15 applications is at an all-time high (42%), nearly 10 percentage points higher than the overall RPG success rate at NIGMS for the year (33.4%). In fact, the NIGMS R15 success rate has been higher than the overall NIGMS RPG success rate every year since FY 2015. Looking deeper into this fiscal year’s data, we will now show how the review score correlates with the likelihood of funding for AREA applications.

In general, applications with overall impact scores lower than 40 are most likely to receive funding, with some additional awards made in the 40-50 range, and few awards made beyond a score of 50. This trend holds across all 5 years, with the note that most of the awards in the 40-50 score range were made in FY 2020 and FY 2022, when success rates were higher than previous years.

As with all our NIGMS programs, we regularly monitor our portfolios and are committed to providing transparent information to the research community about our investments, policies, and activities.

We would like to acknowledge our colleague Alexandra Ainsztein, who served as the previous program officer for AREA at NIGMS, for the insights provided on this post. 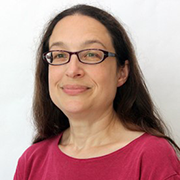 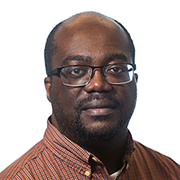 Charles is a biochemist who manages grants in the areas of bioenergetics, redox reactions, and trace metal homeostasis. He is a scientific contact for the NIGMS Academic Research Enhancement Awards (AREA) R15 program and is chair of the NIH R15 Program Advisory Committee.