program, a joint initiative between NIGMS and the Science of Science and Innovation Policy (SciSIP) program

in the Directorate for Social, Behavioral and Economic Sciences at the National Science Foundation (NSF). The longstanding SciSIP program funds research designed to advance the scientific basis of science and innovation policy and is a leader in this field.

END_OF_DOCUMENT_TOKEN_TO_BE_REPLACED

Continuing our longstanding commitment to train the next generation of biomedical scientists and support the careers of students and postdoctoral scientists from diverse backgrounds, for example groups underrepresented in biomedical research, we sought input from the community through a request for information (RFI) on strategies to enhance successful postdoctoral career transitions to promote faculty diversity, specifically in research-intensive institutions. The RFI was open May 24 to July 20, 2018, and received a total of 89 unique responses from stakeholders including postdoctoral scientists, faculty members, and professional societies.

END_OF_DOCUMENT_TOKEN_TO_BE_REPLACED

Although NIGMS is not the only source of federal funding for sepsis research, the Institute supports a substantial portfolio of research that includes both fundamental and clinical studies, from the molecular to the organismal, that emphasizes the host’s response rather than causative factors such as infection or injury. In an effort to more rapidly move NIGMS’ sepsis research program and its translation forward, we’ve issued a Request for Information (RFI) to obtain feedback, comments, novel ideas, and strategies that address the challenges and opportunities in sepsis research to accelerate advances in detection of and treatment for this condition.

END_OF_DOCUMENT_TOKEN_TO_BE_REPLACED

A recent analysis by NIGMS staff has uncovered some promising results for women entering academic positions in the biomedical sciences. The study, which published today in the Proceedings of the National Academy of Sciences (PNAS), found that once men and women receive their first major NIH grant, their funding longevity is similar. The data contradict the common assumption that, across all career stages, women are at a large disadvantage compared to men.

The results of the analysis should be encouraging for women interested in becoming independent investigators, since the likelihood of sustaining NIH grant support may be better than commonly perceived. You can read the full study, “NIH Funding Longevity by Gender,”

in the current edition of PNAS.

NIGMS has a longstanding commitment to developing a diverse pool of biomedical scientists through a variety of institutional training and student development programs. Based on stakeholders’ feedback through Requests for Information (NOT-GM-15-108; NOT-GM-17-017), as well as extensive analyses and discussions with NIH staff and the community, we intend to make adjustments to our programs designed to enhance the diversity in the biomedical research workforce. The modifications, which the NIGMS Council recently approved, are designed to: 1) provide equity of trainee support across programs; 2) prevent programmatic overlap; 3) align the funding strategies with the programmatic goals; 4) tailor expectation of outcomes, support mechanisms, and review considerations according to the institution’s level of research activity; and 5) strengthen our ability to evaluate the success of the programs. The changes, described in more detail in the recent Videocast of the Council Open Session, will impact the Initiative for Maximizing Student Development (IMSD), the Research Initiative for Scientific Enhancement (RISE) program, and the Maximizing Access to Research Careers – Undergraduate Student Training in Academic Research (MARC U-STAR) programs. We don’t anticipate any immediate changes to our Postbaccalaureate Research Education Program (PREP). Possible adjustments to the Bridges to the Baccalaureate and Bridges to the Doctorate programs are currently under discussion.

END_OF_DOCUMENT_TOKEN_TO_BE_REPLACED

UPDATE: NIH has released the Strategic Plan for Data Science. The plan was informed by community and public input, and NIH will continue to seek input as it implements the plan, many elements of which are well underway. By maximizing the value of data generated through NIH-funded efforts, the pace of biomedical discoveries and medical breakthroughs for better health outcomes can be substantially accelerated.

To capitalize on the opportunities presented by advances in data science, the National Institutes of Health (NIH) is developing a Strategic Plan for Data Science. This plan describes NIH’s overarching goals, strategic objectives, and implementation tactics for promoting the modernization of the NIH-funded biomedical data science ecosystem. As part of the planning process, NIH has published a draft of the strategic plan [PDF 490KB], along with a Request for Information to seek input from stakeholders, including members of the scientific community, academic institutions, the private sector, health professionals, professional societies, advocacy groups, patient communities, as well as other interested members of the public.

As co-chair of the NIH Scientific Data Council, which is overseeing development of the Strategic Plan for Data Science, I encourage your comments and suggestions. Responses should be submitted via an online form by April 2, 2018.

When I joined NIGMS about four years ago, I was struck by the number of press releases from journals and grantee institutions that came across my desk each day. Many of them focused on a recently published paper and failed to explain how the work fit into the broader field. Others overstated the research results to make them sound more exciting and closer to clinical application. 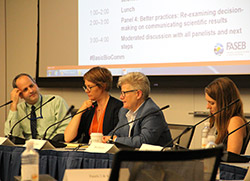 I moderated one of the panel discussions.

). While these discussions focused on clinically oriented research, we at NIGMS began thinking deeply about how the issue relates to basic biomedical science. On the heels of our work with the Federation of American Societies for Experimental Biology (FASEB) on enhancing rigor and reproducibility in biomedical research, we started talking to them about this topic as well. Two years later, we were pleased to host their Workshop on Responsible Communication of Basic Biomedical Research: Enhancing Awareness and Avoiding Hype

The June 22 meeting brought together a diverse group of science communicators [PDF, 22KB]

who included early and established investigators, researchers who study science communication, academic and corporate communication officers, policy advisors and journalists. Each panelist represented a stakeholder group with a role in what panelists later called the “hype cycle” and shared his or her perspectives on the problems of hype, the incentives that cause it and recommendations for avoiding it. The meeting focused on basic biomedical research, but the discussions were also relevant to other areas of science.

In her keynote address

, veteran science journalist Erika Check Hayden defined hype as “exaggerating the outcomes of research, for whatever motives people have, leading to potential negative effects due to inaccurate portrayal of research.” She credited this definition to Judith Greenberg, our deputy director. The subsequent discussions highlighted the shared responsibility among all the stakeholder groups for improving science communication and changing the incentives for it. Panelists acknowledged that scientists sometimes oversell the conclusions of studies hoping to get their work published in “better” journals or to improve their chances for obtaining funding; journals may decide on manuscripts to publish based on which ones they think will be cited the most or get press attention; communication officers and journalists are often judged by how many hits their stories get; and universities and research institutes may consider the fundraising potential of scientific news stories.

Here are some of the topics discussed during the workshop that really resonated with me. END_OF_DOCUMENT_TOKEN_TO_BE_REPLACED

NIGMS has a longstanding commitment to developing the next generation of biomedical scientists through a variety of programs, including the M.D.-Ph.D. dual degree Medical Scientist Training Program (MSTP). This program provides Ruth L. Kirschstein Institutional Predoctoral Training Grant (T32) awards to medical institutions that are responsible for training physician scientists. The Physician-Scientist Workforce Working Group Report [PDF, 6.2 MB] of NIH’s Advisory Committee to the Director highlighted the decline of physician scientists as a percentage of overall NIH principal investigators. NIH data presented at the 50th Anniversary Medical Scientist Training Program Symposium showed that while earlier cohorts of MSTP trainees were highly successful in achieving independent research careers and NIH grant support, more recent graduates have been less successful. Many factors may contribute to this difference, including lengthening of the post-M.D.-Ph.D. training period before achieving independence and increased competition of investigators for limited research funds and positions.

We are seeking input from the biomedical research community and other interested groups through a Request for Information (RFI) on strategies and ideas for the modernization of physician-scientist training that can be addressed through the MSTP.

More specific topics are included in the RFI, but examples of broad areas of interest are:

and can be anonymous. The due date for providing input is August 9, 2017.

NIGMS actively supports efforts to catalyze the modernization of biomedical graduate education. We have undertaken a number of initiatives to stimulate this process, including hosting a symposium to showcase innovations in biomedical graduate education and providing administrative supplements to T32 predoctoral training grants to enhance rigor and reproducibility, career development and skills development.

On June 8, 2016, we took another step to encourage such change with the release of a Request for Information (RFI) seeking input on how our institutional predoctoral training grants program can be used to promote innovations in training. The RFI asked members of the community to weigh in on the strengths and weaknesses of the current system, the skills the next generation of graduate students should acquire, barriers to change and strategies to promote change through our institutional predoctoral research training grants.

We received 90 unique responses from stakeholders ranging from students and faculty to institutions and professional societies. Themes represented in the responses were organized around five major categories:

View larger image
Figure 1. Major Categories in Graduate Education RFI Responses. Bar chart showing the number of RFI responses in which one of the major categories was represented. A total of 90 unique responses were received for the RFI.

While NIGMS recognizes that those who responded to the RFI are unlikely to represent a random subset of the individuals and organizations who have a stake in graduate biomedical education, these responses provide insights regarding how members of the extramural community view the current challenges and opportunities in graduate biomedical education. As such, these comments will inform NIGMS’ ongoing efforts to catalyze the modernization of graduate education through a new predoctoral T32 funding announcement, which is currently under development. For more details about the analysis, we encourage you to explore the report.