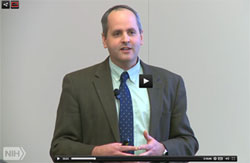 Among the eligible investigators, 80% were male and 20% were female. This ratio was unchanged among those who applied, as were the percentages across racial and ethnic groups (Figure 1). Thus, although the demographics of the group of investigators that was eligible for this first FOA were skewed in several ways, the skewing was not exacerbated in those who chose to apply. END_OF_DOCUMENT_TOKEN_TO_BE_REPLACED

Given that the NI and ESI policies have been in effect for some time, we wanted to update and extend an analysis of success rates by investigator status performed in 2010 to see if NIGMS has been able to meet these objectives. While we found that the success rates for all NIs were comparable to or greater than that of EIs, our new analysis also revealed that the subset of NIs who completed their terminal research degree at least 10 years ago (non-ES NIs) had consistently lower success rates in obtaining R01s relative to both ESIs and EIs.

We focused our analysis on NIGMS Type 1 R01 applications for Fiscal Years 2011-2014. Figure 1a shows the success rates for EIs and NIs. During the time period analyzed, success rates for both EIs and NIs were comparable. However, when the NIs are separated into ESIs and non-ES NIs, the data show a more nuanced result (Figure 1b). ESIs consistently had higher success rates than either EIs or non-ES NIs when applying for new R01s.

END_OF_DOCUMENT_TOKEN_TO_BE_REPLACED

The September 9 receipt date for the Maximizing Investigators’ Research Award (MIRA) for New and Early Stage Investigators (R35) is just one week away! We recommend that applicants submit a few days early to give themselves time to check that their applications as received by NIH are complete and correct.

A few points of clarification about the deadline:

UPDATE: Due to technical difficulties, the MIRA webinar was not recorded. We have posted the slides on the MIRA Web page, where we’ll also post a summary of the webinar questions and answers.

NIGMS Director Jon Lorsch and I will field questions about the recently announced Maximizing Investigators’ Research Award (MIRA) for New and Early Stage Investigators (R35) during a webinar on Tuesday, June 30, from 1-2 p.m. EDT. Participants will be able to submit questions using the chat feature. We’ll post the archived webinar and slides on the MIRA Web page.

The most common questions we’re getting about the new MIRA funding opportunity announcement (FOA) have concerned eligibility, so we created a new flowchart to help determine this. Another common question has related to research areas appropriate for support by a MIRA. These and other topics are covered in our answers to frequently asked questions about the second MIRA FOA.

If you have colleagues who may be eligible to apply but may not know about the FOA or may have questions about it, please share this post with them.

As with the first MIRA FOA, this competition is an experiment and is intentionally limited to a small group of eligible applicants. If the pilot is successful, we plan to issue future FOAs covering additional groups of investigators.

I’ve tried to explore these questions in a further analysis.

END_OF_DOCUMENT_TOKEN_TO_BE_REPLACED

We have just expanded the pilot of our Maximizing Investigators’ Research Award (MIRA) to include new and early stage investigators. The application due date is September 9, and we request—but do not require—letters of intent by August 9.

Awards will provide all of the support from NIGMS for research related to its mission in an investigator’s laboratory. [Editor’s note: Awards will be for 5 years, similar to the current average length of an NIGMS R01 award to new investigators.]

END_OF_DOCUMENT_TOKEN_TO_BE_REPLACED Below is a plot for 655 NIGMS R01 applications reviewed during the January 2010 Council round.

This plot reveals that many of the awards made for applications with less favorable percentile scores go to early stage and new investigators. This is consistent with recent NIH policies.

The plot also partially reveals the distribution of applications from different classes of applicants. This distribution is more readily seen in the plot below.