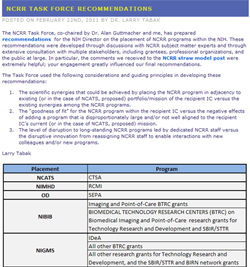 I have previously noted that NIH has proposed creating a new entity, the National Center for Advancing Translational Sciences (NCATS), to house a number of existing programs relating to the discipline of translational science and the development of novel therapeutics. Plans for NCATS have been coupled to a proposal to dismantle the National Center for Research Resources (NCRR), in part because the largest program within NCRR, the Clinical and Translational Science Awards, would be transferred to NCATS and in part because of a statutory limitation on the number of institutes and centers at NIH.

NIH leadership established a task force to determine the placement of NCRR programs within NIH. This group initially developed a “straw model” for discussion and more recently submitted its recommendations to the NIH Director. The recommendations include transferring the Institutional Development Award (IDeA) program and some Biomedical Technology Research Centers and other technology research and development grants to NIGMS at the beginning of Fiscal Year 2012.

As you may be aware, I have expressed concerns about the processes associated with the proposal to abolish NCRR. I hope it is clear that my concerns relate to the processes and not to the NCRR programs, which I hold in very high regard. This opinion is also clearly shared by many others in the scientific community, based on comments on the Feedback NIH site and in other venues.

While there are several additional steps that would need to occur before organizational changes could take place, we at NIGMS are already deepening our understanding of the NCRR programs through meetings with NCRR staff and others directly familiar with the programs. We welcome your input, as well, particularly if you have experience with these NCRR programs. Please comment here or contact me directly.