As part of an ongoing examination of our grant portfolio to ensure that we invest taxpayer money as effectively and efficiently as possible, we recently analyzed changes over time in the distribution of investigator-initiated research compared to research funded through targeted funding opportunity announcements (FOAs). 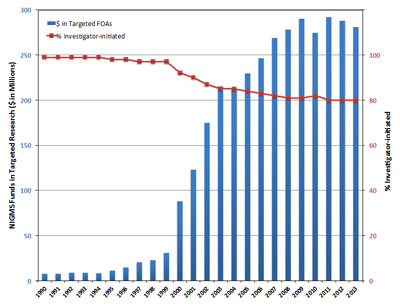 View larger image
Changes over time in NIGMS investments in investigator-initiated research (research grant funds not associated with targeted FOAs) (right axis) and research funded through targeted FOAs (left axis). The analysis does not include fellowship, career development and training awards; programs transferred to NIGMS from the former National Center for Research Resources; and some other programs. For more details about the analysis, which was performed by Jim Deatherage, chief of our Cell Biology Branch, see the NIGMS Funding Trends Web page.

The figure shows that in the early 1990s, 99% of NIGMS’ grant budget supported investigator-initiated research, compared to 80% today. During the budget doubling in Fiscal Years 1998-2003, the Institute’s investment in research funded through targeted FOAs increased dramatically, then continued to increase at a slower rate during Fiscal Years 2004-2009.

As I discussed in a previous post about our large-scale research initiatives and centers, there were many good reasons for using FOAs to target specific areas of research with some of the funds made available by the budget doubling. For example, FOAs allowed the Institute to experiment with catalyzing the development of such new and emerging fields as structural genomics, pharmacogenomics and systems biology.

Since the budget doubling ended, however, maintaining steady support for our targeted research portfolio has made it difficult to maintain steady support for investigator-initiated research project grants (RPGs). Partly as a result, the success rate for RPGs (the number of funded RPGs divided by the number of RPG applications) fell below 20% in Fiscal Year 2013. Although a number of factors have contributed to the declining success rate, a significant one is that targeted and investigator-initiated research grants compete directly with each other. To bolster the success rate, we need to decrease our commitment to targeted FOAs. Furthermore, because none of us knows where the next major advances will arise, the soundest investment strategy is to have a distributed portfolio in which researchers investigate a wide range of scientific questions. History strongly suggests that letting scientists “follow their noses”—which involves a combination of curiosity, expertise, creativity and serendipity—is the most productive route to findings that will eventually translate into medical and technological breakthroughs.

To rebalance our portfolio in order to renew and reinvigorate our commitment to investigator-initiated research, we will be reducing our use of targeted FOAs, generally reserving them for cases in which they are likely to have a major impact on a large segment of the biomedical research enterprise. These cases could include promoting the rapid development of accessible, cost-effective new technologies that enable major advances in understanding biological systems; more efficiently organizing the Nation’s basic biomedical research resources to provide scientists throughout the country access to high-end instrumentation and technical expertise; and, in some instances, using targeted FOAs with defined lifetimes to catalyze the rapid development of emerging research areas.

8 Replies to “Bolstering Our Commitment to Investigator-Initiated Research”