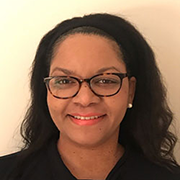 Shawn is chief of the Developmental and Cellular Processes Branch and acting director of the Division of Genetics and Molecular, Cellular, and Developmental Biology. A molecular biologist, Shawn manages grants in the areas of chromosome and nuclear structures, along with organismal response to environmental stressors.

UPDATE: The application window for these positions has now closed.

We’re recruiting scientists for positions in our Division for Research Capacity Building (DRCB) and Division of Genetics and Molecular, Cellular, and Developmental Biology (GMCDB). The successful applicants will be responsible for scientific and administrative management of a portfolio of research grants and/or research training and career development awards, and will stimulate, plan, advise, direct, and evaluate program activities related to their field of expertise.

END_OF_DOCUMENT_TOKEN_TO_BE_REPLACED

UPDATE: This position is now closed.

We’re recruiting for an accomplished scientist to manage research grant, fellowship, training, and other types of awards focused on the cellular and molecular mechanisms underlying inheritance, gene expression, and development. The position is in our Division of Genetics and Molecular, Cellular, and Developmental Biology. Job responsibilities involve working collaboratively with other staff to stimulate, plan, advise, direct, and evaluate program activities for a portfolio of research awards.

END_OF_DOCUMENT_TOKEN_TO_BE_REPLACED 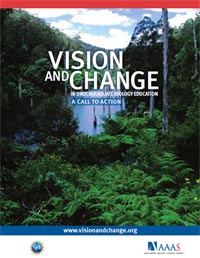 is under way to transform undergraduate biology education at the departmental level.

Along with the National Science Foundation and the Howard Hughes Medical Institute, we will select 40 “Vision and Change Leadership Fellows” to devise prototypic solutions that facilitate the systemic changes outlined in Vision and Change in Undergraduate Biology Education: A Call to Action. These efforts will inform future investments by NSF, HHMI and NIGMS.

We expect fellows to be departmental chairs, former chairs, deans or faculty members at equivalent levels who demonstrate a passion for undergraduate biology education, concern for its future and a desire to act at the local and national levels. Other qualifications include:

As fellows, their activities will include:

If you’re interested in applying, go to http://PULSEcommunity.org for complete details, including a video, sample application, FAQs and more. The application deadline is July 9, 2012. For more information, e-mail me or Shiva Singh, in the Training, Workforce Development and Diversity Division.

The first meeting of NIGMS Division of Training, Workforce Development, and Diversity (TWD) grantees will be held on June 12-15, 2012, in San Antonio, Texas. The meeting will provide TWD grantees with the opportunity to meet NIGMS program, review and grants management staff as well as incoming NIGMS Director Chris Kaiser.

General sessions planned for this year’s meeting include discussions about the Institute’s strategic plan for training and the vision of the new TWD division. There will also be “how to” sessions on various topics such as developing an evaluation plan, helping students transition to training programs at research-intensive institutions, and building effective business offices for managing TWD grants.

The 2012 meeting is intended for grantees of the following student and postdoctoral development programs:

Meeting registration is open until May 14, but seating is limited, so we encourage you to sign up soon.

We hope to see you in June!

As part of our commitment to developing a diverse scientific workforce, we sponsor the Society for Advancement of Chicanos and Native Americans in Science (SACNAS) national conference

and the Annual Biomedical Research Conference for Minority Students (ABRCMS)

These conferences represent two of the largest gatherings of science and math undergraduate students from groups that are underrepresented in the biomedical and behavioral sciences. They are terrific opportunities for you to meet and recruit outstanding students. You also can volunteer to mentor students or judge their posters.

This year, SACNAS will meet in San Jose, CA, October 27-30, and ABRCMS in St. Louis, MO, November 9-12. For more information or to register, visit the meeting Web sites.

This fall, NIGMS will be sponsoring the Society for Advancement of Chicanos and Native Americans in Science (SACNAS) national conference in Anaheim, CA, September 30-October 3, and the Annual Biomedical Research Conference for Minority Students (ABRCMS) in Charlotte, NC, November 10-13.

These meetings present two wonderful opportunities for you to meet and recruit science-oriented undergraduate students from groups that are underrepresented in the biomedical sciences. In addition to listening to research talks, you can volunteer to mentor students during the meeting or judge their posters. For those of you who are MORE program directors, you’ll also be able to support your students.

I encourage you to attend one or both of these meetings, as they bring in some of the best and brightest undergraduate students in the nation.

For additional information or to register as a meeting participant, mentor and/or judge, visit the SACNAS 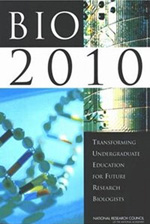 Last month, I attended the “Beyond Bio2010” conference held at the National Academy of Sciences. The meeting highlighted the progress made in implementing the Bio2010

The 2-day meeting, which was held in the same room that the Bio2010 report was publically released in 2002, primarily consisted of teams of biology, math and computer sciences faculty discussing strategies used by their institutions to reform science curricula. Among the efforts that really caught my attention were those that:

In addition, I presented a summary of NIGMS-supported efforts, namely the MARC Curricular Improvement grant, a competitive mechanism for eligible institutions to implement Bio2010 recommendations. The inclusion of all undergraduate students, with a focus on historically unrepresented populations, was a significant theme of the conference. In fact, I was delighted to see one of our MARC Curricular Improvement grantees from the University of Puerto Rico talk about her institution’s efforts on this front.

A unique feature of the conference was that several undergraduate students also presented posters on their interdisciplinary biology and mathematics research. Their posters showed math majors collecting samples in a stream and biology majors performing mathematical modeling. A faculty attendee at the conference noted that when he walked around and listened to the student presenters, he really could not figure out who was a math major and who was a biology major—a desired outcome of Bio2010!

If you are interested in finding more details about “Beyond Bio2010,” a report of the conference is slated to be published in the Fall 2010 issue of CBE—Life Sciences Education

Shawn is chief of the Developmental and Cellular Processes Branch and acting director of the Division of Genetics and Molecular, Cellular, and Developmental Biology. A molecular biologist, Shawn manages grants in the areas of chromosome and nuclear structures, along with organismal response to environmental stressors.