On January 17, the President signed into law the Consolidated Appropriations Act of 2014, funding the Federal Government for the remainder of the fiscal year and providing increased support for NIH relative to the post-sequester levels of 2013. The NIGMS Fiscal Year 2014 budget is $2.359 billion, which is about $66 million, or 2.9%, higher than it was in Fiscal Year 2013.

It’s too early to know what this will mean for the NIGMS grant application success rate—the number of competing R01 applications we fund divided by the total number of competing R01 applications we receive. A number of other, largely independent factors in addition to the budget can impact the success rate, as well. We hope that our latest analysis of NIGMS funding trends illuminates the interplay among some of these factors. Thanks to Tony Moore, Jim Deatherage and Ching-Yi Shieh for help with the data collection and analysis.

Figure 1 shows the percentage of R01 applications funded by NIGMS as a function of percentile scores for Fiscal Years 2009-2013. Fewer grants scoring above about the 12th percentile were funded last year than in the previous 4 years. In fact, the funding curves shifted more to the left each year in this period, except in 2012, which had a slightly better success rate than 2011. This was due in part to a dip in noncompeting R01 grants that had to be funded along with no increase in the number of competing applications relative to 2011. (For a 4-year R01, the second, third and fourth years are all noncompeting grants because they are funded without review by a study section. The funds required to pay the noncompeting awards are often referred to as “out-year commitments.”) Funding levels fell again in Fiscal Year 2013 due to the sequester cuts and increases in the numbers of competing applications and noncompeting grants (see below). 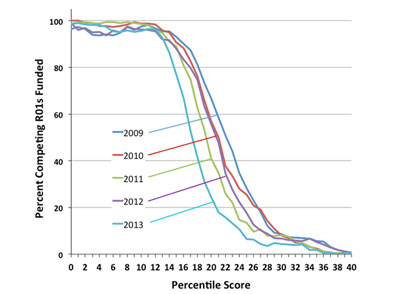 View larger image
Figure 1. Percentage of competing R01 applications funded by NIGMS as a function of percentile scores for Fiscal Years 2009-2013. For Fiscal Year 2013, the success rate for R01 applications was 21%, and the midpoint of the funding curve was at approximately the 17th percentile. See more details about Figure 1 analysis. 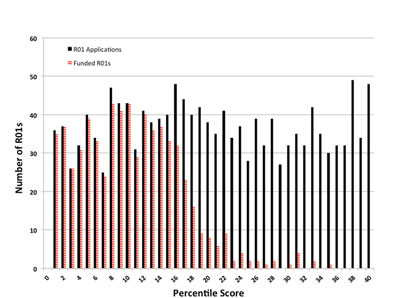 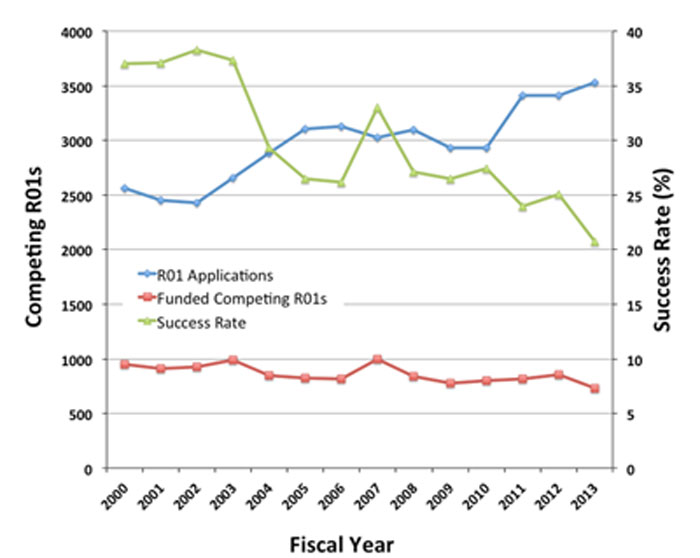 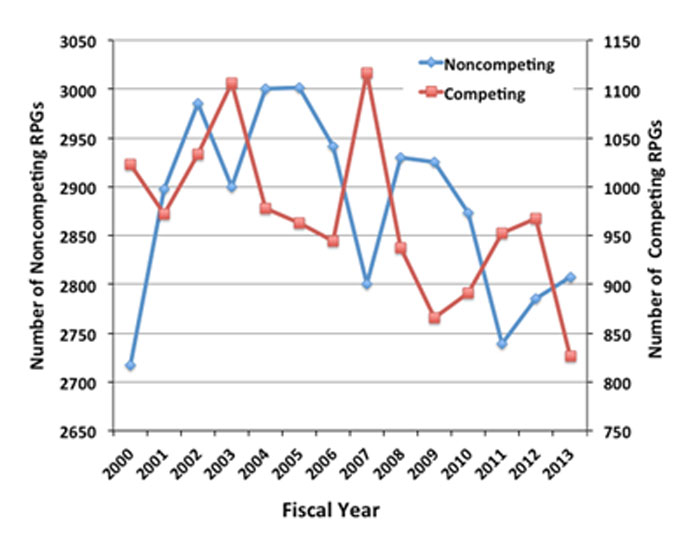 This cycle was apparently set in the early 1990s when the Institute shifted the duration of most competing RPGs from 5 to 4 years. The result was that the last group of 5-year awards and the first group of 4-year awards ended in the same year, creating a significant dip in noncompeting grants and a corresponding jump in competing grants that the Institute could fund. The bolus of grants awarded that year kept noncompeting commitments high for the next 3 years, until they all came up for renewal again. As you can see in Figure 4, the cycle has persisted to this day.

The cycle may lead you to wonder if you should try to time your application to correspond to a trough in noncompeting grants. You might get lucky and have all of the factors that drive success rate work in your favor. However, if other factors act to decrease the success rate, you might end up worse off. For example, even though 2011 was a trough year for noncompeting grants (Figure 4, blue line with diamonds), a jump in the number of applications (Figure 3, blue line with diamonds) worked in the opposite direction, and the success rate actually fell (Figure 3, green line with triangles).

Finally, the Institute’s budget is also a factor in determining the success rate. Figure 5 shows the NIGMS budget (red line with squares, left axis), the budget committed to competing and noncompeting RPGs (blue line with diamonds, left axis) and the ratio of the RPG budget to the total NIGMS budget (green line with triangles, right axis). 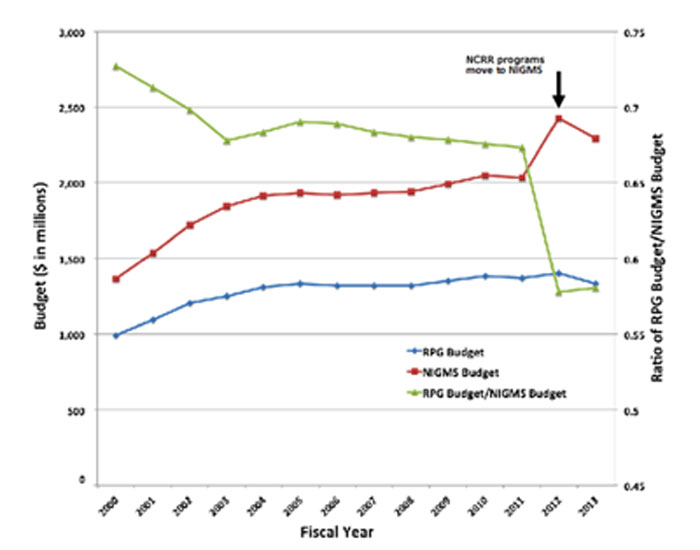 View larger image
Figure 5. Total NIGMS budget (red line with squares, left axis) and budget committed to competing and noncompeting RPGs (blue line with diamonds, left axis) for Fiscal Years 2000-2013. The green line with triangles shows the ratio of the RPG budget to the total NIGMS budget (right axis). The jump in the NIGMS budget and corresponding drop in the RPG/NIGMS budget ratio occurred when large, primarily non-RPG programs were transferred to NIGMS along with their associated funds from the former National Center for Research Resources.

The Institute’s budget grew during the NIH budget doubling (1998-2003). It also jumped by nearly $400 million when the Institutional Development Award (IDeA) and Biotechnology Research Resources programs moved from the former National Center for Research Resources to NIGMS. A variety of pressures were responsible for the ~2% decline in the ratio of RPG funds to the NIGMS budget that occurred during Fiscal Years 2005-2011, including commitments to targeted initiatives and increased funding for training programs.

Because we don’t yet know the number of applications we will receive or the number of noncompeting grants that will end early due to retirements or other events, we can’t predict what our success rate will be in Fiscal Year 2014. We hope, however, that the steps we are taking to bolster our commitment to investigator-initiated RPGs will have a positive impact on the success rate.