One question that has been asked about the Maximizing Investigators’ Research Award (MIRA) for Early Stage Investigators is how awardees will be affected by the fact that they cannot have additional NIGMS research grants. In response to this question, we reviewed the research project grant (RPG) funding history of all 707 Principal Investigators (PIs) who received an NIGMS R01 as an Early Stage Investigator (ESI) between Fiscal Years 2009 and 2015. The PIs were grouped by Year of PI, which ranges from Year 1 to Year 5 (five years is the typical length of an ESI R01 award). Year 1 is the year in which the PI was awarded his or her initial R01, and Year 2-Year 5 represent the subsequent years. The awards and funding history of each PI were confined to Fiscal Years 2009-2015; thus, all PIs are included in the Year 1 group, while those who received their initial R01 in 2013, for example, would only appear in the Year 1-Year 3 groups.

The distribution of NIGMS awards (including subprojects) for these PIs is depicted below. 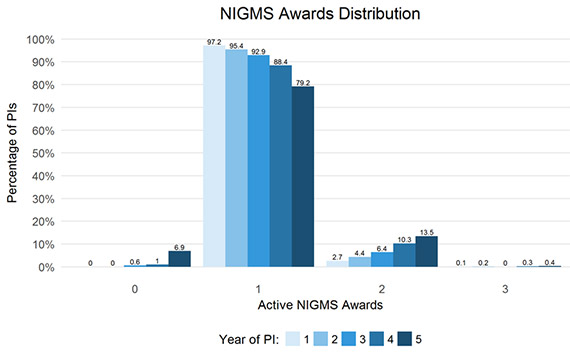 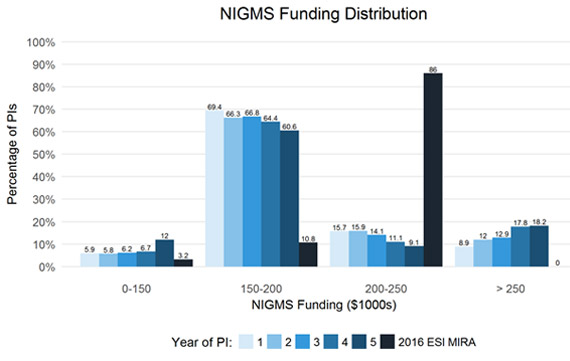 Taken together, the above data imply that the majority of NIGMS ESI awardees will not be negatively affected by the ESI MIRA requirement of having only one NIGMS grant for a maximum of $250,000 in direct costs per year. Furthermore, a majority of ESIs may actually benefit from the high probability of receiving between $200,000 and $250,000 in NIGMS funding as an ESI MIRA recipient (in fact, 50% of 2016 ESI MIRA recipients received the maximum amount). We also hope that ESIs will benefit from the enhanced research flexibility of the MIRA program, as well as the planned increase in funding stability. We will continue to monitor the progress of the ESI MIRA program carefully to ensure that it is meeting the program’s objectives and enhancing the efficiency and effectiveness of the biomedical research enterprise. 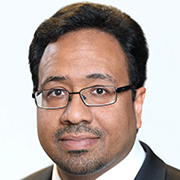 Nathan, who was trained in high energy physics, is a data scientist in the NIGMS Division of Data Integration, Modeling, and Analytics. He uses numerous mathematical and computer science techniques to study the Institute’s research portfolios, training programs, and funding policies.