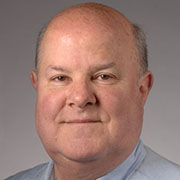 Ward, a structural biologist, managed grants in biophysics. He directed the Protein Structure Initiative and guided the scientific course of several protein databases as well as biomedical research at NIH-supported synchrotron facilities.

To give the biomedical research community the opportunity to offer comments on this topic, we have just issued a request for information (RFI). We want your opinion on the most effective methods for the determination of membrane protein and large macromolecular assembly structures and/or the need for new tools to aid in structure determination of these proteins or protein complexes.

END_OF_DOCUMENT_TOKEN_TO_BE_REPLACED

We just issued a request for information (RFI) seeking input on the needs within the biomedical research community for such resources and the types of protein expression services that would be most beneficial. Examples might include the expression of proteins from a large number of sequences, orthologs and homologs; prokaryotic and eukaryotic protein expression; and expression for special needs, such as for large numbers of mutants, proteins requiring anaerobic expression, and the incorporation of nonproteogenic amino acids like seleno-methionine.

END_OF_DOCUMENT_TOKEN_TO_BE_REPLACED

The latest update brings the total number of PDB entries to 100,147.

just passed a major threshold—the release of its 100,000th entry. This free online repository of experimentally determined protein and nucleic acid structures, which NIGMS and other parts of NIH have helped fund since 1978, facilitates atomic-level insight into protein structure and function. PDB is widely used by the scientific community to study basic biological processes like transcription, translation, enzymology, bioenergetics and metabolism and also for more medically oriented investigations into disease mechanisms and drug design.

In addition to scientists, students and educators use the digital resource for their own explorations of protein structure, function and interactions as well as to gain greater knowledge about biology.

View larger image
Number of structures available in the PDB per year, with selected examples. For details, see http://www.eurekalert.org/multimedia/pub/73206.php?from=267554

Approximately 260,000 visitors access PDB each month. Scientists around the world currently deposit about 200 structures per week, which PDB staff review, annotate and augment with links to other relevant biological data. To meet the challenges posed by large structures, complex chemistry and use of multiple experimental methods, the repository recently launched a software tool for structure deposition and annotation

If you aren’t already a PDB user, I encourage you to check out its resources to see if they could help advance your research. As you may know from the coverage in various popular news outlets and science journals (see below for a list), the United Nations Educational, Scientific and Cultural Organization has declared 2014 to be the “International Year of Crystallography

.” This is in recognition of the 100th anniversary of the Nobel Prize in physics to Max von Laue for the discovery of diffraction of X-rays by crystals.

I first learned about crystallography in college, when I took a course in physical chemistry that included an introduction to chemical crystallography. Crystallography combines math, computer science, chemistry and biology—and that’s what convinced me to do graduate work in the field. When you determine structures, you’re often the first person to ever see that molecule, and that’s pretty exciting.

Since 1914, scientists have made many advances in the use of X-rays for the atomic-level determination of the 3-D structure of molecules. For instance, in the early years of the 20th century, William and Lawrence Bragg, father and son, learned that the newly discovered X-ray radiation could be used to locate the atoms in a crystal of matter. Their work ultimately led to Bragg’s Law for understanding X-ray diffraction and the structure determination of materials ranging from table salt to the ribosome. Breakthroughs made possible by crystallography (and diffraction) have led to 15 Nobel Prizes, including 7 with NIGMS support.

X-ray crystallography has impacted all areas of science, including biomedical research. The first biological finding was made by James Sumner, who discovered that enzymes could be crystallized (urease was the enzyme). In the years following, X-ray diffraction and crystallography have been used to reveal the structure of DNA and countless proteins and enabled structure-based drug design efforts. Crystallography has become an established tool of small molecule and protein studies.

Today, modern biological crystallography is practiced at synchrotron facilities, with access to 20 X-ray crystallography beamlines supported entirely or in part by NIGMS. Efforts are under way to make smaller, more intense beamlines that will allow the study of small crystals. Crystallography is also very much a part of the new X-ray laser facilities, where several NIGMS investigators are carrying out pioneering research on very small crystals of proteins, including membrane proteins, on X-ray scattering of proteins in solution and on protein dynamics.

Clearly, crystallography continues to be a cutting-edge field, and I’m excited to see what advances it brings during the coming years.

Articles about the International Year of Crystallography:

While the Protein Data Bank includes nearly 88,000 protein structures that were determined experimentally, there are millions more proteins whose structures are unknown. Comparative or homology modeling offers a powerful approach for leveraging solved structures to reveal important biological details about the others.

Two efforts, both funded through the Protein Structure Initiative, are evaluating the current state of our ability to model protein structures and complexes and seeking ways to further advance the accuracy and usefulness of homology modeling.

The NIGMS-funded GPCR Network is hosting its third round of the GPCR Docking and Modeling Assessment, GPCR Dock 2013. This assessment of homology modeling and docking methods is focused specifically on G protein-coupled receptors (GPCRs), seven-transmembrane proteins that help transmit essential signals from a wide range of hormones and neurotransmitters in the body and that are a major target of existing drugs. Participants will submit prediction models for four target GPCR-ligand complexes recently determined by GPCR Network investigators and yet to be published. An analysis of the results will be available a few months after the March 3 submission deadline. To participate, register by February 1. For more information, contact the organizers.

As I stated last month, we have reissued the Technology Development for Protein Modeling (R01) funding opportunity announcement. It encourages grant applications from institutions that propose to develop novel technologies that will significantly improve the accuracy of comparative modeling methods for protein structure prediction. Applicants should focus on one or both of these goals: 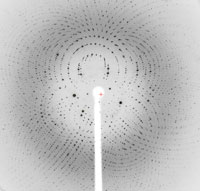 As NIH Director Francis Collins recently noted on his blog, this year marks the 100th anniversary of the first experiment demonstrating that X-rays are diffracted by crystals. Two years later, this discovery was recognized with a Nobel Prize in physics. For this and other reasons, the United Nations has designated 2014 as the International Year of Crystallography

. The designation offers an opportunity for organizations worldwide to increase public awareness of the field and promote access to crystallographic knowledge and activities.

X-ray crystallography is central to many areas of basic biomedical research, and NIGMS supports a number of major crystallographic efforts that may be of interest and use to you.

Since 2000, our Protein Structure Initiative (PSI) has undertaken the high-throughput determination of protein structures by crystallography and NMR methods, resulting in the deposition in the public Protein Data Bank

of more than 5,000 macromolecular structures. The initiative’s current phase focuses on the determination of biologically relevant and important structures. Members of the scientific community can nominate proteins

We also have been involved in supporting the construction, upgrade and maintenance of synchrotron beamline stations for X-ray crystallographic studies. These activities include a state-of-the-art facility at the Advanced Photon Source at Argonne National Laboratory, which we established in partnership with the National Cancer Institute. Our support of synchrotron facilities and of crystallographic technology development has improved access for NIH grantees and other users and increased the capacity for crystallographic data collection.

I look forward to sharing more details about the International Year of Crystallography as activities get under way.

will be held this year at Cold Spring Harbor Laboratory in New York, October 28-30.

It’s quite fitting that the meeting is being held here. It was a 1971 symposium at the laboratory titled “The Structure and Function of Proteins at the Three-Dimensional Level” that led to the establishment of the PDB as a freely accessible portal for the experimentally determined structures of biological macromolecules. Since then, the PDB has grown into an international resource for structural biology, today containing nearly 75,000 structures of proteins, nucleic acids and complex assemblies.

Because it is such a vital resource for researchers, NIGMS and other parts of NIH, along with the National Science Foundation and Department of Energy, have helped fund the PDB’s operation for many years. NIGMS is also a sponsor of the symposium.

The October event, which is open to all, will include presentations by many prominent scientists who have been instrumental in the development of the PDB and the field of structural biology. Among the confirmed speakers are Michael Rossmann of Purdue University, an early advocate of the PDB; Wayne Hendrickson of Columbia University, a leader in solving the structures of membrane proteins; and Kurt Wüthrich of the Scripps Research Institute and the ETH Zürich, a pioneer in NMR structure determination techniques.

A limited number of travel awards to attend the symposium are available for students and early career scientists; applications are due by
August 1.

More information about the program, registration and travel is on the meeting Web site. 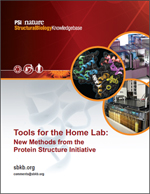 Over the course of its 10-year existence, the Protein Structure Initiative has supported the development of new technologies and methods that improve the throughput of protein structure determination. Many of them apply to the production of purified proteins for functional and structural studies, and you don’t need access to major research centers to use them.

To help you take advantage of these resources, the PSI Structural Biology Knowledgebase

offers a series of short articles summarizing tools and technologies developed by PSI-supported investigators. You may also request plasmid clones via the PSI Materials Repository

As always, you can nominate targets

for PSI investigators to solve.

If you’re going to the 2011 American Crystallographic Association meeting (May 28-June 2 in New Orleans) and want to know more about using these PSI products in your own lab, plan on attending my session, “PSI Tools for the Home Lab.” Also, the Structural Biology Knowledgebase will offer workshops at the International Conference of Structural Genomics (May 10-14 in Toronto).

The program announcement for NIGMS program project grants was published yesterday in the NIH Guide. This grant mechanism enables outstanding scientists working on different aspects of a similar problem to collaborate.

Applicants should propose innovative, complementary approaches to solving a significant biological question within the NIGMS mission. Over a 5-year period, program projects may receive total direct costs of up to $6.5 million (excluding any proposed equipment purchases and subcontract indirect costs). If you request more than $500,000 in direct costs in any year, you must receive approval from NIGMS staff before submitting your proposal.

I strongly encourage you to speak to the relevant program staff member before submitting a P01 application. For more information, see the NIGMS Program Project Funding Policies Web site.

We have just issued a new “partnership” program announcement for researchers interested in a biological problem of significant scope to collaborate with structural biology researchers.

The announcement is a part of the PSI:Biology initiative, which will apply high-throughput structure determination to a broad range of biological problems. Successful applicants will partner with researchers within the PSI:Biology network.

Ward, a structural biologist, managed grants in biophysics. He directed the Protein Structure Initiative and guided the scientific course of several protein databases as well as biomedical research at NIH-supported synchrotron facilities.