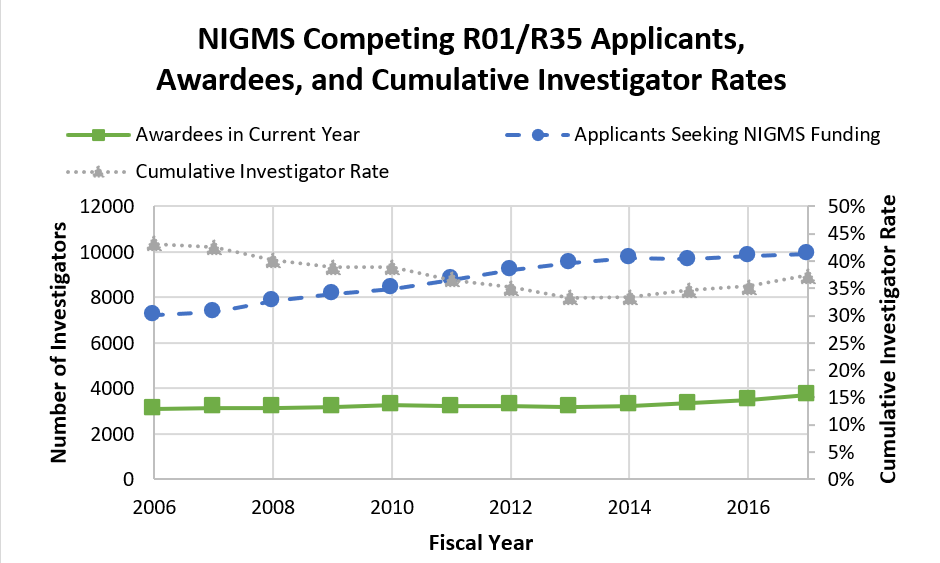 As part of our commitment to a diverse portfolio, we also emphasize support for the next generation of biomedical researchers. Supporting early stage investigators (ESIs), as well as maintaining stable support for investigators through their critical first renewals, is essential to maintaining a vibrant research community. As shown in Figure 2, the number of ESIs receiving their first competing NIGMS major research project grant has increased in the last two years. This is due, in part, to interest in our Maximizing Investigators’ Research Award (MIRA) R35 grant program which includes a funding opportunity for early stage investigators. As we move forward, we will continue to track the stability of support for investigators across all stages of their research careers. 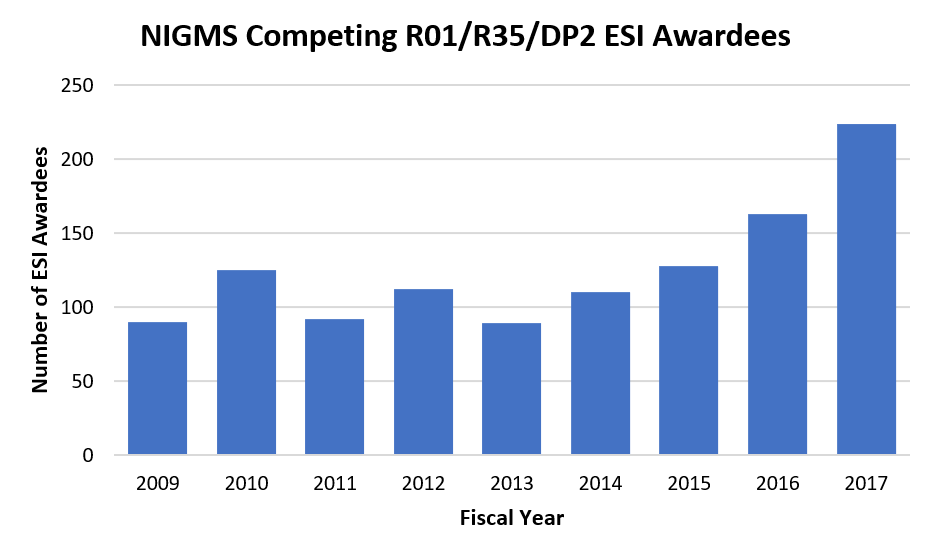 View larger image
Figure 2. Number of NIGMS Competing R01/R35/DP2 ESI Awardees, FY 2009-2017. The number of unique R01, R35, and DP2 ESIs (blue bars) receiving their first major NIH research project grant from NIGMS has typically been 90-110 a year since introduction of the ESI designation in 2009. Over the last two years, NIGMS has made more awards to ESIs, many of whom are supported on the MIRA program.

In addition, we track more traditional measures of our grants portfolio, such as the success rate, calculated as the number of applications funded divided by the number of unique project proposals received. As shown in Figure 3, the NIGMS research project grants (RPGs) success rate for FY 2017 was 30.7%, a percentage point higher than the success rate in FY 2016. We received slightly fewer competing applications in FY 2017 than 2016, and made nearly the same number of awards, resulting in a similar success rate. This marks the third year in a row that success rates have remained relatively stable since their lowest point in FY 2013. MIRA applications and grants are included in these counts for RPGs. As noted above, changes in the numbers of both competing applications and awards influence our success rate. The number of competing applications submitted is largely driven by the research community, although the increasing percentage of investigators with funding since FY 2014 (Figure 1) could have led to a decrease in the number of people submitting applications. In addition, researchers funded through the MIRA program do not submit additional research grant applications to NIGMS, which will lead over time to a decrease in applications. The number of competing grants awarded is affected by our funding policies, budget, and existing commitments to active grants. As stated in our 2015 Strategic Plan, we have been making efforts to bolster support for investigator-initiated research and for individual researchers through careful consideration of our portfolio and funding policies.

As mentioned in our previous funding trends posts, we do not use a strict percentile cutoff (“payline”) to make funding decisions. Instead, we take a variety of factors into account, including peer review scores, summary statements, the relevance of the research area to the Institute’s mission, overall portfolio diversity, and an applicant’s other research support. As a result, a significant number of applications each year are in the “fundable” range, as shown in the funding plots in Figures 4 and 5. In FY 2017, approximately 50% of applications that scored at the 24th percentile were funded, identical to the value in FY 2016 (Figure 4). As with last year, a number of well-scoring R01 applications went unfunded, in part due to NIGMS policies on support for research in well-funded laboratories and funding for investigators with substantial unrestricted support. In general, a well-scoring application for an investigator’s third R01 will be a lower priority for funding than a meritorious application for another investigator’s only grant.

Similar figures are not shown for the MIRA program, as applications are not percentiled and the program is still in its early phases. NIGMS has been carefully monitoring the MIRA program and communicating its findings via regular Feedback Loop posts and will continue to do so. 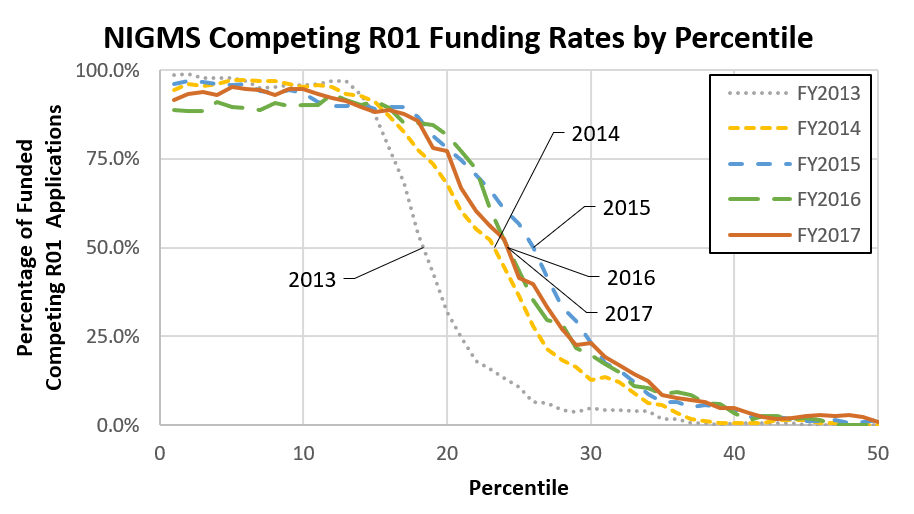 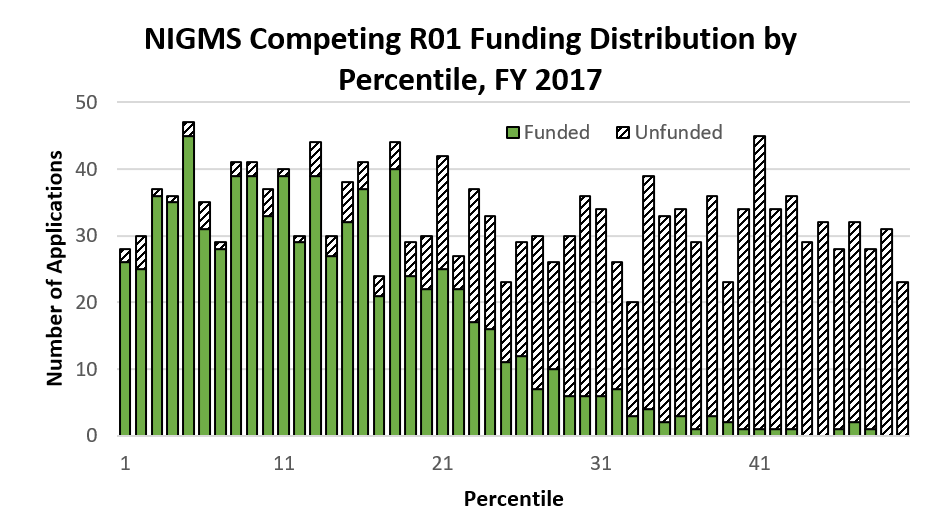 In FY 2018, NIGMS has been operating under a continuing resolution, meaning that our budget is at a similar level to FY 2017. During this time, we are following current guidance as it relates to issuance of awards. However, we continue to use every analytical tool at our disposal to ensure that we maximize scientific returns on taxpayers’ investments by supporting a vibrant and diverse portfolio of outstanding fundamental biomedical research.

4 Replies to “Application and Funding Trends in Fiscal Year 2017”